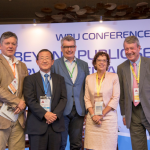 October 26, 2016 / Bali, Indonesia – Earlier today, members and participants of the World Broadcasting Unions concluded a successful one-day WBU Conference in Bali, Indonesia. The Conference was hosted by the Asia-Pacific Broadcasting Union (ABU) and the Indonesian public broadcasting service Radio Republik Indonesia (RRI). It featured a broad and timely agenda that touched on themes important to global broadcasters operating in an increasingly interconnected and precarious world.

The WBU is proud to have held an event that could unite us all in furthering our industry’s goals of better serving our listeners and viewers.

Marshall McLuhan once quipped “the human family now exists under conditions of a global village.” The WBU shares this view and remains committed to enhancing the coordination of national, regional and international efforts in establishing the best professional practices of our media services. This includes enlightening and informing our audiences in their local communities, but also in context of their region, country and the global world around them. – Michael McEwen, Head, WBU Secretariat

The WBU is the coordinating body for broadcasting unions who represent broadcaster networks across the globe. It was established in 1992 as a coordinating body at the international broadcasting level. Since then, the WBU has provided global solutions on key issues for its member unions. The North American Broadcasters Association (NABA) acts as secretariat for the WBU.